Wandering For Wine In Avellino, Italy

I’m not sure I agree with Martin Luther about religion, but that wine quote is spot on! I live in the Avellino Province of Italy, an undiscovered region where tourism is a thing of the future, potentially, not one of the present. I understand their situation. It’s hard to boast about wine when Tuscany is only a few hours away, and talking about castles and ruins seems silly with Campania next door. What I love about Avellino is the small town feel…I’ve written before about my love of small towns. The largest city and capital of the province, Avellino, has only 55,000 people. The next largest town has 22,000, and every other one is less than 12,000. This gives each commune a friendly, neighborhood feel that you won’t find in Naples or other large urban areas.

So why a wine weekend? The wines of Avellino are famous. I love the Greco di Tufo and Fiano de Avellino, two white varieties I’d never heard of before. In total I visited two wineries, a grappa distillery and a wine bar. I based myself in a town called Montefusco, due to its proximity to the vineyards. Being a hilltop town, the views of the valley below were stunning. The Avellino region has awakened me to the amazing Greco di Tufo. It’s a ‘go with anything’ wine, so enjoy it with meats, fish, cheeses, or on its own with nothing at all. Only eight villages in the Avellino region can produce Greco, and there’s even an administrative board that needs to validate and bless each winery’s process.

The ‘Tufo’ part of the name references the most famous village where Greco is made. Tufo was home to a sulfur mine industry until 1984, and the sulfuric nature of the soil acts as a natural weed deterrent while also adding a slightly acidic flavor to the wine. I had a ‘fire and brimstone’ moment that Dante would be proud of when my tour guide, and owner of the winery, lit a sulfur rock with his lighter. The current owner is a wanderer himself, having lived previously in London, Paris and Moscow. He took over the family business in 2009. The grounds of the winery were beautiful. If I owned a winery like this, I might consider living in one of the spare rooms. The quick witted owner spoke many memorable quips as he walked me through the wine making process. Greco di Tufo was a ‘nervous wine’, you ‘couldn’t tame it with oak barrels’, and it’s the ‘reddest of the white’. In the sparkling wine room, he talked about the various equipment used for mixing and bottling, including a carbon dioxide injector that’s now illegal in Italy. What’s a winery tour without a tasting? The owner led me to the basement and a great display of wines, meats and cheeses. I savored the Greco and Fiano, and even enjoyed the red varieties that were light, smooth and easily drinkable. He carefully rinsed out the glass with wine between tastings to preserve the flavor.  I had an aged 1990 Greco, which was similar to sherry, and the Greco sparkling wine was better than most French champagne. Contrasting the quaint experience in Tufo, Mastroberardino is the largest winery in the Avellino region. You can commonly find this in many wine shops in Naples, and it’s the most routine visitor to my home refrigerator. ‘Monopoly’ might be too strong a word, but they definitely are the corporate winery in a sea of smaller ones in this region. The winery was in an odd location, the center of an industrial area. I’m used to more posh locations for wineries, but this can create a more exclusive feel which definitely wasn’t the vibe here. The tour guide Virginia walked me through sharing her knowledge and passion for wine. As we traversed the wine barrels, she pointed out the artwork on the ceiling. I particularly liked the painting from a Romanian artist of Bacchus, the God of wine. The tasting room resembled a fancy banquet hall. Virginia had four wines for me to try, and not surprisingly the Greco di Tufo was the finest of the lot. Mastroberardino also has a very good Falanghina, a white wine variety that’s always been hit or miss with me. During the tasting I learned about the soil composition of the region, and which grapes grew where and why. Again, Virginia really knew her stuff. 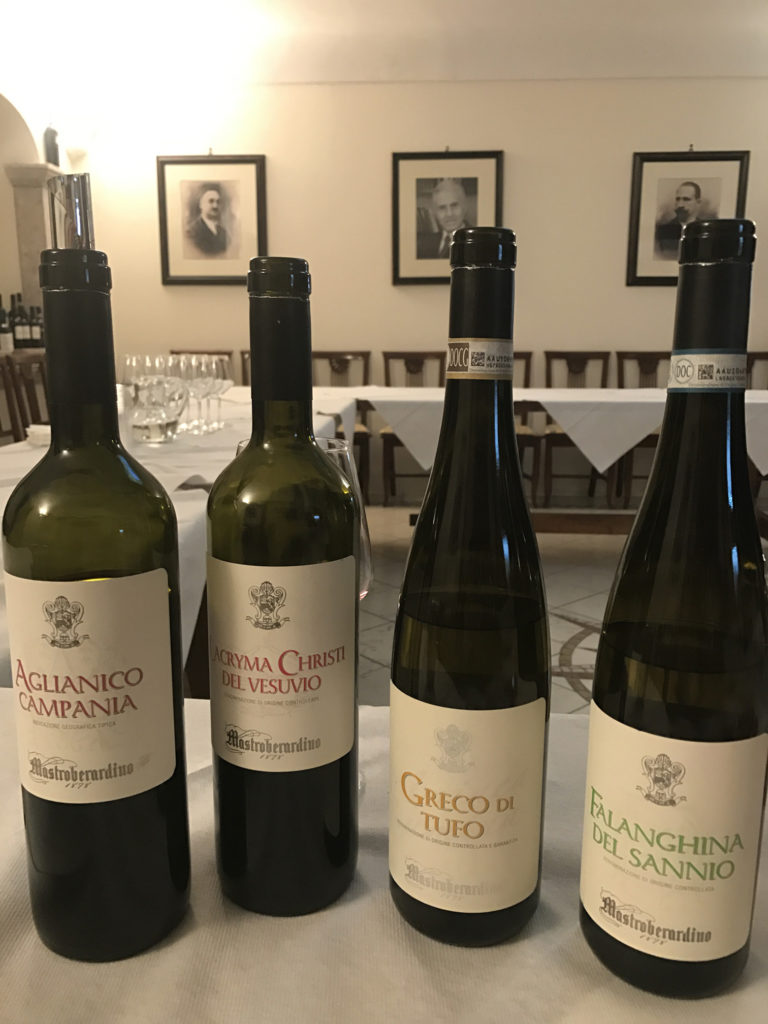 The final stop was the basement vault, which contained wine bottles that were nearly a century old. Over the course of two world wars Europeans got into the habit of hiding personal valuables to deter thieves. Locals found wine bottles stashed in various nooks and crannies, and turned them over to Mastroberardino for display. Although I’m not the biggest lover of red wine, the 1928 bottle of Taurasi was tempting! A chance meeting at a cafe in Montefusco morphed into a tour of a grappa distillery. I view grappa as the ‘leftover drink’. One simply distills anything remaining from the wine making process – including skins, pulp, stems and seeds – into a strong, mind-erasing liquor. Judging by my words, it’s clear I’m not a fan, and yet here I was at ground zero of the grappa making process. The owner was very gracious in showing me the evolution from wine leftovers to grappa, and he made efficient use of very small space. The distillery sat in a rough-looking industrial zone, and the tiny building somehow held all the equipment without looking too cluttered. The ‘tasting room’ looked more like an administrative office, and the baby crib in the corner was an interesting touch. Like I said, grappa is very strong, like brandy, and it was hard to discern any difference between the varieties I tasted. I surprised myself by finding one I liked, not surprisingly made from the Greco di Tufo grape. This clearly was the lightest and smoothest one, and I even saw an advertisement describing it as ‘best for a woman’s palate’. Avellino is the capital of the province with the same name, so I was expecting an energetic, bustling city…wrong. There is nothing that bad or that good about Avellino, meaning it qualifies as ‘remarkably average’. This gritty, nondescript city is still known internationally for the massive earthquake in 1980 that killed many and necessitated extensive refurbishing, thus leading to a more modern rather than antique look.

Maybe that’s why I was so surprised to stumble upon Dejavu Winery, a place that would be more fitting on the upscale streets of Santa Barbara. It exuded a hip vibe, and their wine selection had multiple varieties from throughout the Avellino region. I tried two different Greco di Tufo’s here, solidifying it’s spot as my favorite white wine in the world. As I sipped the fine white, scarfed down the homemade pasta, and admired the artwork on the walls, I realized how lucky I was to live in this province. Avellino may not be well known to tourists, but it’s home to me. 2 Responses to “Wandering For Wine In Avellino, Italy”